Our Promise to You:

At Sharif Fine Jewelers, we are committed to your complete satisfaction. That is why we cover your purchase with our Lifetime Warranty.

We will inspect, clean, and maintain your jewelry for as long as you own it. We warrant and guarantee the quality of your jewelry as long as only a Sharif Fine Jewelers master jeweler maintains the item*.

Buy now and take up to 6 months to pay interest free!

Call Us at any of our locations to set up an appointment. 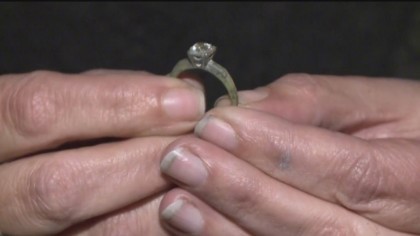 SACRAMENTO (CBS13) — A family heirloom that survived the Camp Fire is being restored to its former glory with help from a Sacramento Jeweler.

Heather Thornewood’s diamond and platinum ring is more than 100 years old. She thought she lost it along with her home in the Camp Fire. After digging it up in the ruins over her home, she was devastated by how badly it was damaged.

So, Sharif Jewelers stepped in and helped provide the shining moment she needed.

The family heirloom was restored through countless hours of scraping, polishing, and reshaping.

For Thornewood, the value of the ring lies in its sentimental worth.

“It lived through the Great Depression, it’s over 100-years-old and I’ll be able to pass it on to my children at some point in time,” she said.

Thornewood’s great-great-grandfather made the ring out of a tie-stud and gave it to her great-great-grandmother sometime in the early 1900s. It was eventually passed down to her, but when the Camp Fire destroyed her Paradise home, she thought she had lost it forever.

Heather and her family returned to the rubble for what she thought would be a fruitless search for her one-of-a-kind ring back in December.

“We spent 3 hours looking for it…sifting thru mud and ash, and using buckets of water to be able to push the mud thru our sifters,” Thornewood said.

Sharif Jewelers in Sacramento took the soot-covered treasure and returned it to its original sparkle and shine after three hours of work.

A little time and a skilled jeweler helped to take away some of the pain of the Camp Fire by refurbishing a piece of the past.

Mahmoud Sharif, the owner of the jewelry store, said this isn’t the first time he’s helped a Camp Fire survivor. He called it an honor to help bring a sense of comfort and relief to Heather and her family.

get exclusive offers and news.

Don't have an account? Enter your order number and email address below to track your order.